The Taliban were removed from politics and military power by the U.S.-led military coalition in 2001. In February 2020, both sides brokered a peace deal, which stipulated the U.S. and NATO troop withdrawal in return for the Taliban preventing al-Qaeda operations within Taliban-controlled territories. In addition, the Taliban were required to establish a dialogue with the Afghan government to stabilise the country.

Despite the agreement, the Taliban attacks against the Afghan security forces intensified. The U.S. government proceeded with the withdrawal, which is expected to complete on the 31st of August, as stated by the POTUS on the 8th of July.

Almost simultaneous to the U.S. troop withdrawal from Afghanistan, the Taliban have seized control of every major city in Afghanistan. The  first major offensive on the Afghan military took place on the 4th of May in the Helmand province. Kandahar, the second largest city in Afghanistan, fell into the hands of the Taliban on the 13th of August. Despite Biden’s announcement on the 14th of August to deploy 5,000 U.S. troops to support safe evacuations from Afghanistan, the Taliban were able to enter Kabul almost unopposed on the 15th of August – allegedly on motorbikes, police pickup trucks and other vehicles that formerly belonged to the Afghan security forces. With the Afghan president Ashraf Ghani having fled the country, and local security forces crumbling, the Taliban are now in control of the governmental and military facilities.

Through strategic mining of multi-media sources – including audio and text processing – it is possible to detect certain trends within the media landscape. The results span a variety of sources from different geographies and different languages. The trend graph below shows mentions of the named entities/keywords Afghanistan, Kabul, and Taliban in traditional and social media, coinciding with mentions of Migration, from 22nd July to 22nd to August. Media mentions of the named entities simultaneously increase on 14th of August, thus reflecting the Taliban’s impending takeover of Kabul.

The visualisation below provides a heat map of social media posts mentioning the Named Entity/Keyword Taliban in (1) January 2021 and (2) August 2021. The comparison of the two heatmaps reveals the rapid international increase in social media users discussing the Taliban online.

The word cloud and pie chart tools allow for visualising names, entities, organisations and countries. Please note that the size of the font represents the number of times an entity has been mentioned. In order to obtain a high-level overview of the most mentioned topics in Afghan media in August 2021, the word cloud and pie chart below are restricted to sources located in Afghanistan.

Additional topics mentioned in Afghan media add more context to the situation in territories captured by the Taliban following the withdrawal of the U.S. and NATO troops. The HENSOLDT Analytics Globe visualisation tool picked up media mentions of the Named Entities Hamid Karzai International Airport, Airport, مطار , and/or هوایی ډګر , which increased from 184 in January to 38.037 mentions in August 2021 in Kabul, Afghanistan. The increasing volume of mentions correlates with social media and local news reporting on the Kabul airport evacuation efforts.

The Taliban and other Terrorist Groups: Will the Taliban‘s advance embolden others?

When governing Afghanistan from 1996 to 2001, the Taliban provided sanctuary for Osama Bin Laden’s al-Qaeda.

Despite the 2020 U.S.-Taliban agreement, it is feared that al-Qaeda is still “heavily embedded” within the Taliban in Afghanistan. Already in October 2020, E. Fitton-Brown, coordinator of the United Nation’s Islamic State, Al-Qaeda and Taliban Monitoring Team, told the BBC that the Taliban promised al-Qaeda continued allyship.

In addition to Afghanistan’s situation still unfolding at this point in time, the Taliban’s rapid takeover of Afghanistan may embolden Jihadist terrorist groups all over the world. 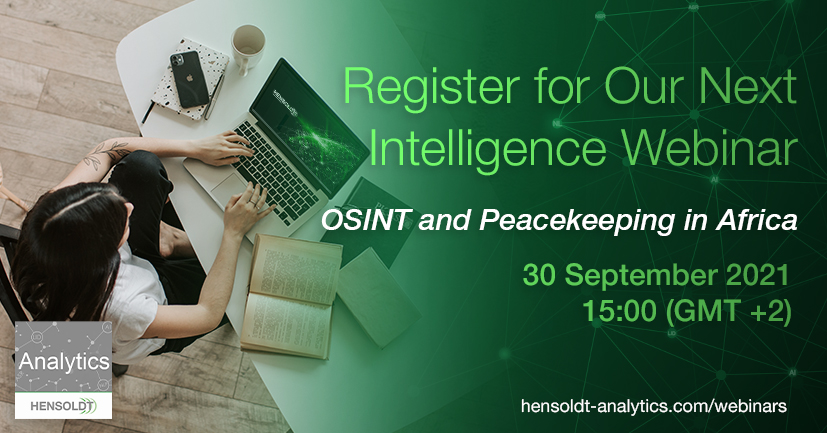 Register for our next Intelligence Webinar!

Our next webinar – OSINT and Peacekeeping in Africa – will take place on the 30th of September.

The deadline for registrations is the 29th of September at 14:00 (GMT+2). The event is free of charge. Click on the button below to secure your spot.